Pearly’s been laying eggs.  She usually lays 3 eggs, 1 every other day, but she’s only laid 2 eggs and it’s been 3 days since the last one.  She seems uncomfortable and is straining as though something is stuck.

Is this an Emergency?

Until you know more, it’s possible that Pearly could die quickly from this problem.  It’s important to bring her to the vet and get an evaluation.  What happens after your vet confirms that there is an egg stuck inside depends on several different factors…

This egg isn’t coming out the way it should.

What kind of bird is Pearly?

Smaller birds have fewer reserves than bigger birds.  An eggbound canary will go downhill much much faster than an eggbound macaw.  Technically, any kind of bird could have problems with eggs – delayed passage, dystocia (eggbinding), diseases of the reproductive tract…however, eggbinding is much more common in smaller birds such as Budgies and Cockatiels than in Amazons and Macaws.

How sick is Pearly?

Is she straining? Was she straining and now has stopped?  Is she eating, sleepy-eyed, unable to stand up or just plain looking like heck?  The more sick that Pearly is, the more quickly she’ll need intervention.

What’s been going on in Pearly’s past?

Is this her first egg?  Her third this year?  Or has she already laid 20 eggs and may be flat out of calcium?  If there isn’t enough calcium in the diet, Pearly will have started to take it out of her bones in order to make a hard shell for that egg.  Eventually she just won’t have any more.

Birds that are on a nutritious diet such as pellets will have more resources than those on seed based diets – they have more of the basic building blocks available. But Eggbinding isn’t always about nutrition.  Infection, damage, wear and tear as well as environmental factors may play a big roll.

The first step is to assess how ill Pearly is.  If she is stable and not in pain, we can move a little more slowly through our treatment options in the hopes that conservative treatments are all that she needs.

If stable, we’ll want to support Pearly’s own system and see if she can get the egg out herself.  Fluids, heat, pain medications and calcium can all be helpful to a bird that may be too tired, or too painful, to push.  If that’s not enough, hormones can be applied to relax her cervix enough to let the egg through.

The leftmost egg is a little too round while the egg on the right has an abnormal shell – it deflated while being removed under anesthesia.

Small birds, like budgies and cockatiels, might need to have that egg manipulated out under anesthesia.  This only works in the small birds and only if the egg is not stuck to the reproductive tract or outside of it completely.

Our final option is to remove the egg surgically – cut it out!  We’ll want to stabilize Pearly as much as possible before going to surgery so that she’ll have the best chance of surviving.  Unless Pearly is a valuable breeding bird, that problematic reproductive tract should come out along with the egg. 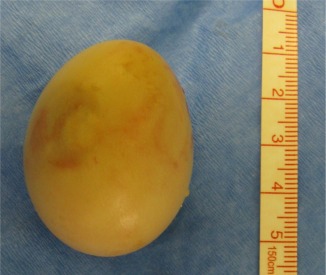 This abnormal egg was removed by surgery – it wasn’t in the reproductive tract!

Now that the egg it out…

After it’s all over, changes should be made to Pearly’s diet or lifestyle to reduce her chances of laying eggs again.  If that isn’t done, you can expect another egg to get stuck – eventually.  Check out this handout on egglaying in birds – what can predispose a bird to doing it and changes that can be made.

A new concern is that too much food, even if nutritionally appropriate, can be a stimulant to be hormonal or lay eggs.  Try not to offer heaping piles of food or too many options.  Budgies only need about 2 teaspoons of food per day (1 of pellets and 1 of other foods including some seed) so don’t offer them a whole cup.

But my bird has never layed an egg…

While any bird could have egglaying problems, not every bird will.  So it is always a good idea to try to prevent stimulating your bird.  A pellet based diet, lack of stimuli (such as nest boxes) and a grate on the bottom of the cage are the 3 most important ways to decrease your bird’s chance of have egg related problems.

Informational handouts on food and egglaying can be found at our website in the Pet Care Information section.

Slow days happen
…in the veterinary world, just like every else.  There are many useful ways to spend a little extra time in the office but one of the best is on certain patients.

A young Umbrella Cockatoo was recently brought in for food spilling out of her crop.  Sounded like a crop burn…After the exam I could agree.  Joy was wonderful to be around both prior to and after her surgery.  Nothing like the extra time you need to work with a baby on the “step up” command … of course head scratching and snuggling were also a requirement!

How Do Crop Burns Happen?

Crop burns occur when overheated formula is fed to birds who are not yet weaned.  It is usually caused when formula is microwaved and hot spots develop randomly.  This is one of the reasons you never want to purchase an unweaned bird (which is illegal in many states) – it can be a very expensive learning process.

Crop burns are usually noticed a few days after the burn actually occurred.  The tissue of the crop and overlying skin are damaged but take few days to open up and let food out.  In most cases this condition is not an emergency.  Surgery is usually delayed until a fistula (a hole from the outside into the crop with healing of the crop edges to the skin) has formed.  We have to wait until all the damaged tissue has died so that we know how much has to be removed.  Surgery is usually planned about 3 to 5 days after the food is visible.

BUT – it’s not a good idea to wait before having your bird examined by the vet.  She might be very sick and need supportive care.  Also, there is a way for a crop burn to become a serious emergency – if the crop wall is burnt open but the skin is not.  Food can collect under the skin and even get into the air sacs.  This can cause physical damage and a serious systemic infection.

Surgery to repair the crop is usually quite successful.  It can reduce the overall size of the crop so it is very important not to overfeed the bird in the week following surgery. Luckily, most birds do very well.

Joy came to us with food pouring out her chest – actually out of a hole in he neck.  Her owner had syringed fed birds in the past.  But this kind of damage can occur even to the experienced bird caregiver.

When the time was right, we took Joy to surgery to remove the damaged tissue and repair the crop.  First, the scab that forms between the crop and the skin must be removed.  All abnormal or suspect tissue, whether skin or crop, must be cut away.  In Joy’s case, she had burns in two areas of her crop, although only one had made a whole.  In retrospect this was one lucky bird.  If the crop had burned a little bit more she might have had food pour out into the space under her skin.  This is very dangerous.

However all went well.  The surgery was successful and Joy woke up from anesthesia ready to get back to eating and growing.  Here is a close up of her surgical incision: