Recently we saw a very sick bird here at Bay Area Bird Hospital.  She had been found in a cat’s mouth – apparently unharmed.  But that was 4 days previous.  The day we saw her she was quiet and sleepy-eyed.  She was fluffed.  Not moving or eating.  We started aggressive treatments right away to support her system and try to treat the effects of the attack.  But we were too late.  She didn’t survive.

Predator Attacks Can Be Deadly

When a bird, a rabbit, rat or any prey animal gets bitten, life threatening emergencies can result.  Some damage is easy to see…

…this conure’s beak was damaged in a hawk attack. 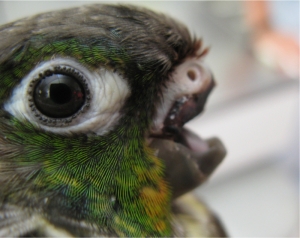 …this little guy lost his upper beak after flying into a wall.  Although we’re pretty sure he got bitten by an amazon right before he flew into the wall.

But some damage is much more subtle.  Bite wounds might be hidden under feathers or in areas that your pet won’t let you look at.  Puncture wounds close up at the skin level rapidly but dirt and bacteria may have been injected into the tissues below.

Can you tell that this budgie is extremely ill? 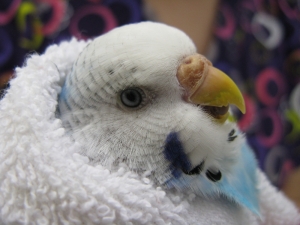 …she nearly didn’t make it.  Luckily she responded to supportive care, antibiotics and warmth.

Predator attacks are deadly for the reasons listed above – hard to see wounds, puncture wounds…  But the saliva of dogs and cats carries a large number of dangerous bacteria.  Pasteurella is a common bacteria that does not harm cats, dogs or humans but can result in death in birds in as little as 24 hours.

Antibiotics should be started the same day as the encounter with the dog, cat or other predator.  Even if there doesn’t appear to be any damage or your bird seems fine.

4 thoughts on “Fluffly Did It…Or My Cat Attacked My Bird!”